On Friday and Saturday of last week we were in Norkirken, Tromsø and had a worship school. I was very excited for this, as it has been spoken over the city that it will be a city of worship. We came together - with people from no less than 7 different churches(!!!) - and worshipped together, and then we talked about how we as worship leaders in an effective way can engage hearts in worship.
On Saturday we went into more practical themes, with Aslak teaching on how we can best create a flowing worship set through our choice of transitioning between songs. Then we jumped on our instruments and practiced.We ended the Saturday with a worship concert where people who hadn't attended the worship school came as well!
Throughout the weekend there was time for us to share hearts with, and encourage one another, as well as learning from the different experience of worship that we have, coming from different backgrounds. It was great to see the hunger that those amazing worship leaders have... And believe me, they are amazing people! They truly are lights in the city of Tromsø, and to see their passion for our King Jesus was very inspiring to me!
So we thank God for a great weekend where worshippers of the north have been encoraged and equipped. Seval people testified that this weekend was exactly what they needed... Come on God! We ask Him to continue to bless the worship leaders and intercessors of Tromsø, and for strength snd joy in their ministry to the Lord and the people!
- Joy 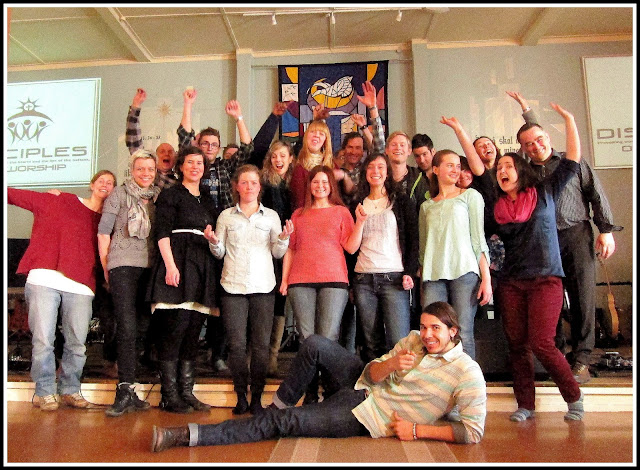 Posted by disciplesofworship at 4:00 AM No comments:

Back from mission trip to Germany and Czech Republic!


Disciples of Worship's mission trip is over, and we are all in awe of what God has done. It has been such an amazing trip, and it is hard to capture it all in words. I will give an update on the last part of the trip, but instead of me trying to explain every detail of what God has done in and through every person, I will show you the team's own testimonies below.


As I said in the last post, we were going to have a concert in Germany Thursday night. We had a great time worshipping with this church, and we could really feel that He was near. 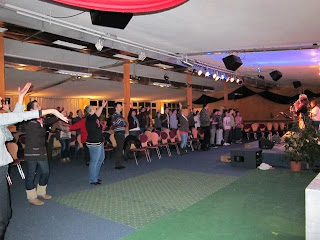 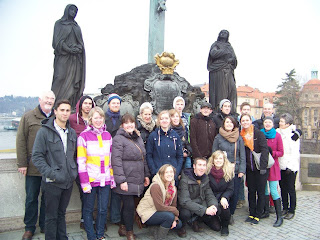 Saturday, we drove to the youth camp in Travna. We met lots of wonderful youth there, and for the evening, we had a worship night/concert. This a very special night. God took control, and in the end, people were so touched all over that many were crying on each others shoulders, and they didn't wanna leave. It was such a powerful time, and I know God healed many hearts this night. Next orning, we were joining their service before we left. For many of us, this time in very, very special. We built relationships, we encouraged people, and we got contacts that will last. We are really looking forward to continue working with these kidz and to see what God will do through them. 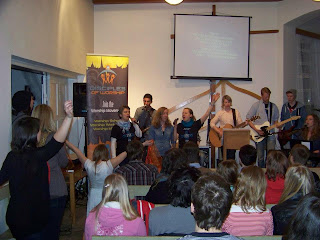 Thank you God for this awesome time in Germany and Czech Republic, for all you did and all the seeds that is sown. Will you let the seeds grow and have your way in these wonderful countries. . 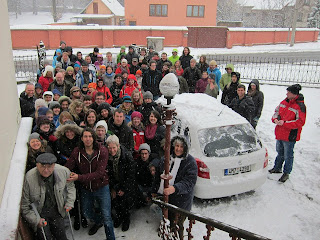 Here we are- the kidz from the camp, the church and us!

March 30, 2013, Travna
The last concert we had in the church in Travna was really special. The church was filled with mostly youths. I could also see that several people were touched when we were playing, but when we were playing the last song, "How He loves", God´s presence came so strongly in the church, and there were several people on each row that were crying. There was so much freedom in the church this night. And the youth had open hearts and ooked like they were so hungry for more.
-Therese Jensen 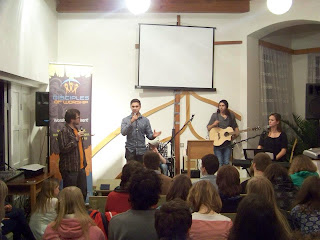 March 24, 2013
A small church in Germany
Marie, Per, Tony &I (Dillon) went to another church to lead worship. It was beautiful, small little square building. About 20 people total there. The man speaking had so much passion, I could sense His presence and how pleased He was. It was beautiful to see fellow brothers & sisters across the world seeking after the Lord. We were extremely blessed. One man, with tears in his eyes said in broken english: "Your music is full of the Holy Spirit". So encouraging! The Lord showed me/reminded me of Romans 3:23 that there is no difference, we all fall short of the glory of God. We are all at the same level,  none better than the other. But, all are saved the same way. Through Christ Jesus our Lord.
-Dillon Rogers 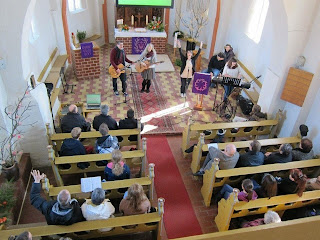 One of the churches we visited in Travna area 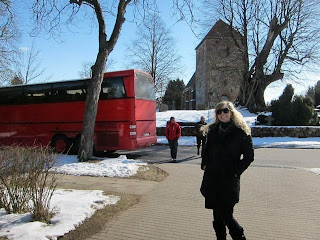 Ready to leave this wonderful church in Travna

March 28 2013
Prophetic art and worship by the Parlament
Wiiieee! I had a blast doing prophetic art outside of the parlament building! For a couple of months I've felt like we should include mire prophetic art in DOW. Yet we didn't think about it that much. As we were preparing for the tour at Grimeud YWAM base, it showed that both Ester and Mary had thought it as well. Then Hilde showed up and initiated it, so it's just been such a God-thing...

So we went out in the streets and I made a painting where multiple colors were painted in one direction, and I painted white that went the opposite direction. As I painted this, Ester came over and asked if I had a drawing for two guys that she and Hilde had been talking to. So I just went over there, not quite sure what it represented, but they were about to leave, so I just had to do it. As I started speaking, the Holy Spirit showed me the meaning: the two guys were pioneers. Going against the flow of this world - standing up for what is right. They were also adventurers who chase after their dreams, and God wants to use them to inspire others to do the same. The white color represented them being in God's will and being a light from Him, for people of the world to see. Aaah, I wish you had seen their faces- huge smiles! After they left, Hilde told me they had seven days off right now. They're in the military for three years and they've done half of it. Now during this vacation, their plan is to visit as many nations as possible. So it was spot on!...
...so I'm excited to continue to use art as a tool to minister to people and to Jesus! YAY! God is so, so, so good to us, we truly have the best Dad in the whole world! Thank you, Daddy!
-Joy Amelia Svedin 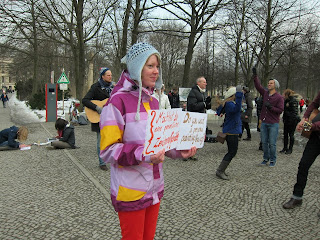 Doing prophetic art and worship by the Parlament in Berlin

March 28, 2013
When we were by the Parlament, I experienced something fun- I had made a prophetic painting I wanted to give to someone, but I didn't know who. I asked God, and suddenly, a police man came, took my paintings (I had two) and read: "God has a special plan for you??" Afterwards, he sat in the police car and looked for a long time on my second painting- a heart with Jesus' name inside. I think he got something to think about :-)
-Linda Jensen 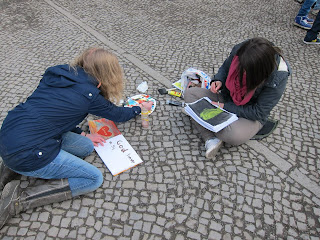 Prophetic art by the Parlament

And, as a final picture: Here we are! The wonderful team. Thank you all for joining us on this adventure, and we are looking forward to see you all again! 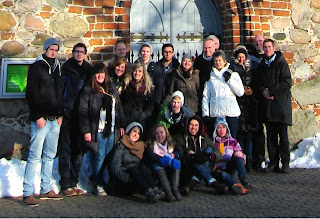 Posted by disciplesofworship at 12:57 AM No comments: